Welcome to WordPress. This is your first post. Edit or delete it, then start writing!

Wow, Don Quixote is an absolute beast of a novel.  The story’s protagonist, Alanso Quixano, is an old man who has read way too many books about chivalry, goes insane, and dubs himself a Knight Errant.  And he gives himself the name Don Quixote, and recruits a local farmer by the name of Sancho Panza, to be his squire.

He re-imagines the world he interacts with.  Windmills become giants, Inns become Castles, prostitutes become Ladies…    He re-dubs a local farm girl to be, Dulcinea del Toboso, and declares his undying love for her.  And his love for Dulcinea remains a driving force for Quixote throughout the novel.

During the first part of the book his adventures bring him to stiff inn-keepers of payment (who ever heard of a knight errant paying for anything,) fighting windmills he believed to be giants, and setting prisoners free.  He also sequesters himself in the mountains as self punishment until he receives a letter from his beloved Toboso.

Eventually, a book is written about the adventures of Don Quixote.  And the duo is ultimately brought into the care of a Duke and Dutchess who pretend to be admirers.   However, the two actually developed several schemes designed to further humiliate the knight and his squire including: making Sancho a governor of an island, Sancho beating himself to break a curse on Dulcinea, and baiting Sancho to pull out his own beard to resurrect a dead woman.

Quixote’s adventures are finally brought to and end when he is challenged to a dual by Knight of the White Moon, (who is actually an ordinary young man from Quixote’s home town.)  The terms of the dual require the loser to give up Chivalry for a period of one year.  After losing his final dual, Quixote, retires back to his home and formulates a plan to be a Shepard.

What I Liked Most:  I really enjoyed Don Quixote’s faithful squire, Sancho Panza.  He is someone of a simpleton, and often serves as the fall guy for many of the procrastinator’s mis-adventures.  In many ways, he serves as the books stooge and comic relief.

What I Liked Least:  I was always taught to write as concisely as possible, and to avoid unnecessary words.  Apparently, this rule doesn’t apply to novelist.  The story contains many, many, many long-winded, letters, songs, and other side-stories that I personally don’t think added a lot of value to plot.

Twist Ending:  The ending is somewhat anti-climatic.  But, I was surprised that before Don Quixote passed away, he renounced the books of chivalry and forbade his niece to marry any man that read them.  Cervantes apparently intended the novel to expose books of chivalry as garbage writing.

Side Note:  I began this book on 12 September, so it took me the better part of three months to finish it.

Here is a great podcast on investing via the crew at Freakonomics.

I stumbled across this today at hbr.com.  It covers the process that Deloitte used to revamp its internal review process.  It was forced to make the change because its previous process had the following issues:

New process focuses on four future statements.  Managers are asked to mark how much they agree with these statements:

Deloitte’s research shows a direct correlation between the frequency of conversations and the engagement of team members.

The system is designed to focus on future performance, not past performance.

I find the concept of rebuilding the workplace and starting a business is very exciting.  However, this book falls flat.  I don’t remember how it found its way onto my reading list.  Its most redeeming quality is that it is very short.

The book can be summarized as follows:  “Everything you think is wrong!  This is how we did it at 37 signals.”

What I Like Most:  The book is a short read.  The audio-book is just under 3 hours.

This book explains why we habitually do things that are bad for us, and why we often struggle to introduce habits that are good for us.  Most of what we do everyday are actually habits.  Habits are in effect, short cuts, that eliminate the need to make decisions, and to save mental energy.  Our brains establish habits for pretty much everything.   and they do so without regard of whether the habit is good or bad for us.   What our brains do know, is that if they perform the habit, they will get a shot of dopamine.

A habit loop consists of four parts and three steps.  The three steps are: a cue, a routine, and a reward.  The three steps perform a habit loop.  We experience a trigger, we perform a routine, and then we get a reward.  Performing the habit loop delivers a powerful shot of dopamine to our brains.  But at the heart of a habit is the craving.  The reward we receive from the habit satisfies one of our cravings.  Cravings are what makes habits so difficult to eliminate.

However, if we can introduce the new behavior by re-engineering one of our existing habit loops, then we are much more likely to succeed.  The easiest way to re-engineer a habit is to keep the old cue, deliver the old reward, and change the routine.

In order to change a routine, we need to understand what cue triggers the routine.  Cues almost always fit into one of 5 categories:  Location, Time, Emotional State, Actions of Others, Preceding Last Action.   We also need to identify the reward and underlying cravings the habit is trying to satisfy.  We can find an appropriate substitute reward by recognizing the cue, changing the reward, and then waiting 15 minutes to see if the craving has been satisfied.   If it has, we have just found a new routine that we can begin executing the next time the cue is triggered.  Otherwise, we substitute a different reward, until we do satisfy the craving. 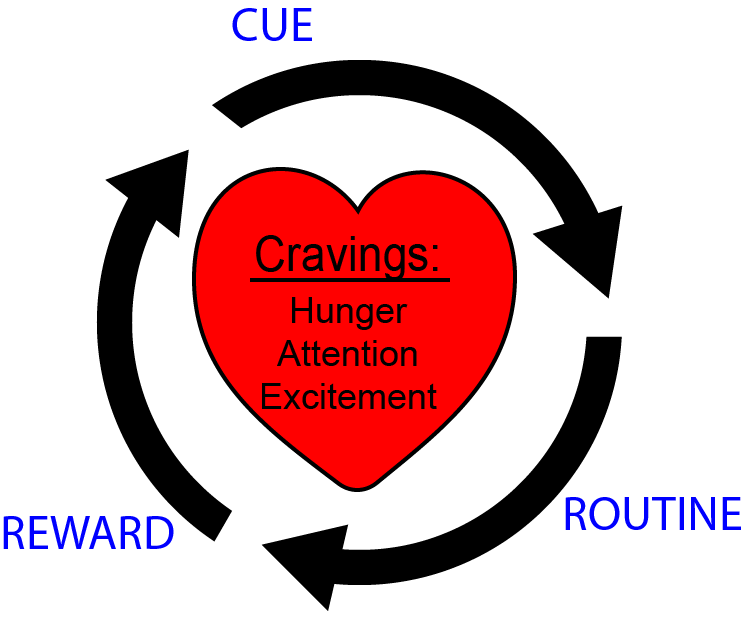 This book is very much the story of Pixar.  Which is a story that I found very enjoyable in itself.  But, the book also contains a lot of ingredients that make the company such a success.  Catmull, who is one Pixar’s co-founders, does an excellent job sharing his experiences over the decades long time frame the book covers.

Catmull believes that creative problem solving is critical for businesses is any industry.  The book outlines the process of making creativity a part of an organizations daily culture.

A hallmark of a healthy and creative culture is that people feel free to express ideas, opinions, and criticisms.  The word honesty carries baggage that can hold people back. So, encourage candor over honesty.  Pixar puts smart people in a room together to solve problems, and encourages them to use candor in their conversations with one another.  They refer to these meetings as a Brain Trust.

An Effective Feedback system is built on empathy; an idea, that we are in this together.  The purpose of feedback is to move the process forward.  Effective feedback requires candor, trust, and empathy.  A note is a good way to give feedback.  A good note is timely and specific, it should inspire,  it clarifies what is wrong or missing, it doesn’t have to include a fix to the problem, and it makes no demands.

Catmull also stresses the importance of “Getting the Team Right.”  He believes that great teams are far more important than great ideas.  He also encourages managers to hire people that are smarter than they are and have a lot of potential. (“hire for potential, not the past.”)  Find, develop, and support good people.    A good team is made up of people who complement each other.   Understand the mix of talent in the group, match the right people with the right task.

I really enjoyed listening to the many challenges that were overcome while making Pixar hits such as  Toy Story, Up, Monsters Inc.

The first version of BASIC came to be on this day in 1964.  Time magazine did an excellent article about the history BASIC a few years ago.

I still have vivid memories of coding my first dungeon crawling game in GW-BASIC when I was thirteen.  I have been coding in one fashion or another for more than 25 years now.  And that experience has served me and my career very well.  I wouldn’t be nearly as good at problem solving without it.

The greatest coach of all time doesn’t spend a lot of time giving interviews, so this is definitely worth a watch.

Quotes from the Interview:

Zero to One is easily the most interesting book that I have read in the past several years.  And, that is saying a lot since I was initially very skeptical about including it on my reading list.  The book held my attention from beginning to end.  Thiel’s covers a variety of topics that are designed to get the reader thinking.  At its core, Zero to One, is essentially a book of ideas.  And many of those ideas challenge the status quo.

Blake Masters narrated the Audible version of the book.  His dictation style has a nice flow to it.  Other narrators could learn a thing or two from him.

Zero to One vs Zero to N:

Sales people compared to their products:

“What important truth do very few people agree with you on?”